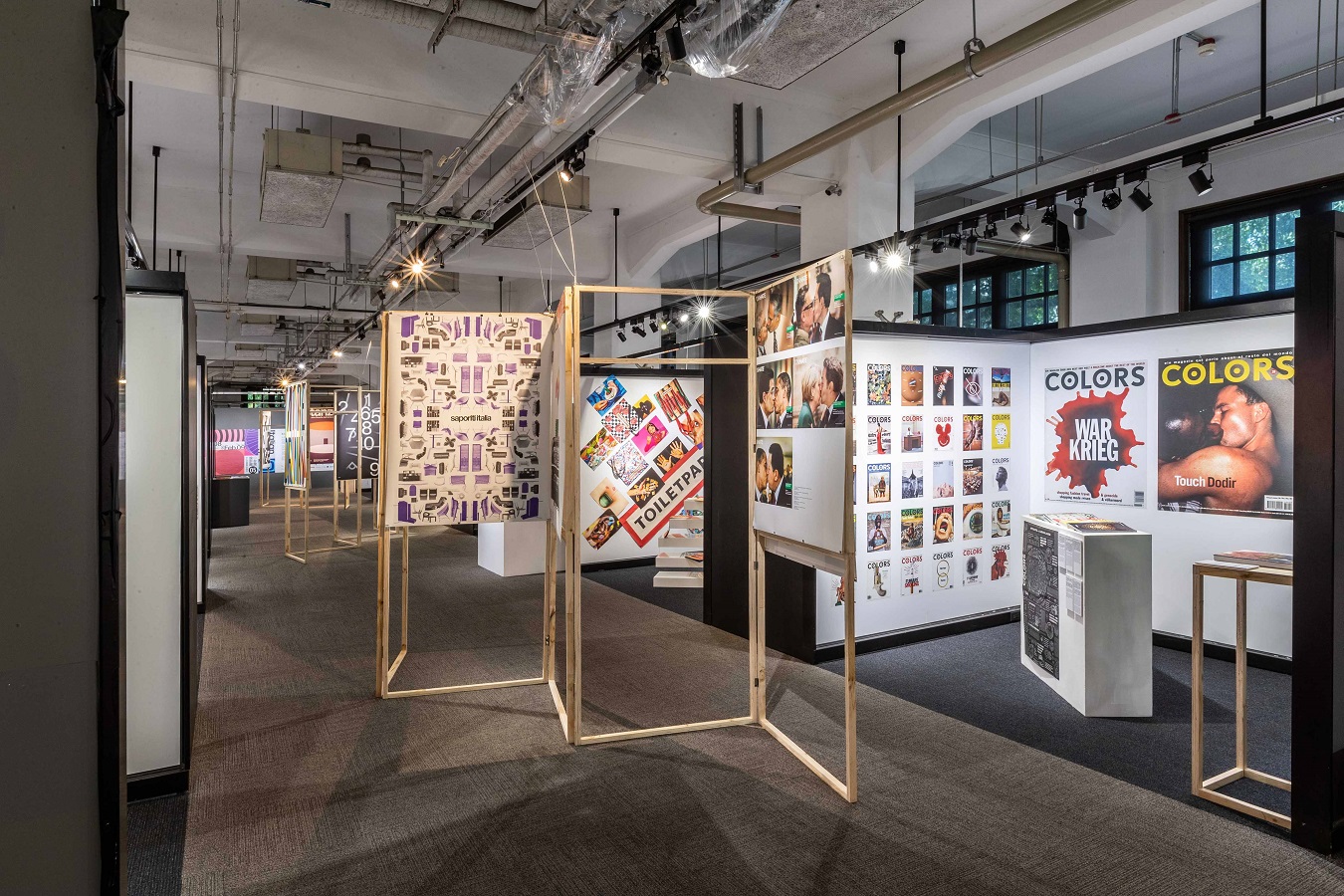 Italy, a country with rich cultural heritage and modern artistic vitality, shines for its glory and pride, history and legacy. The old tradition and modern creativity are well integrated into the realm of artistic design. With Italy’s Fashion and Design weeks setting the trends of the world, their incorporations of classic and contemporary ideation are universally recognized.

It’s ambitious to try to host the great variety of Italian design in the exhibition. We try to interrelate the subject with the concept old-new / classic-contemporary, and divided the exhibition into two sides: one side is the classic works from the 1920s to the 1970s, and the other side is the 1980-2019 modern works. There are six different themes contrasted and communicated like a conversation between classical and contemporary: Style, Book, Type, Branding, Identity, and Magazine. At the rear of the exhibition, Aiap / Italian association of visual communication design is invited to present the selection of posters from the current members. With more than 700 members from the whole Italy, this presentation allows us to peek into the current situation of Italian graphic design. At the same time, space also exhibits the modern classic furniture and product design works of Italy. From graphical to three-dimensional, from reading to living, we hope this exhibition allows visitors to savor the amazing vitality of Italian design. 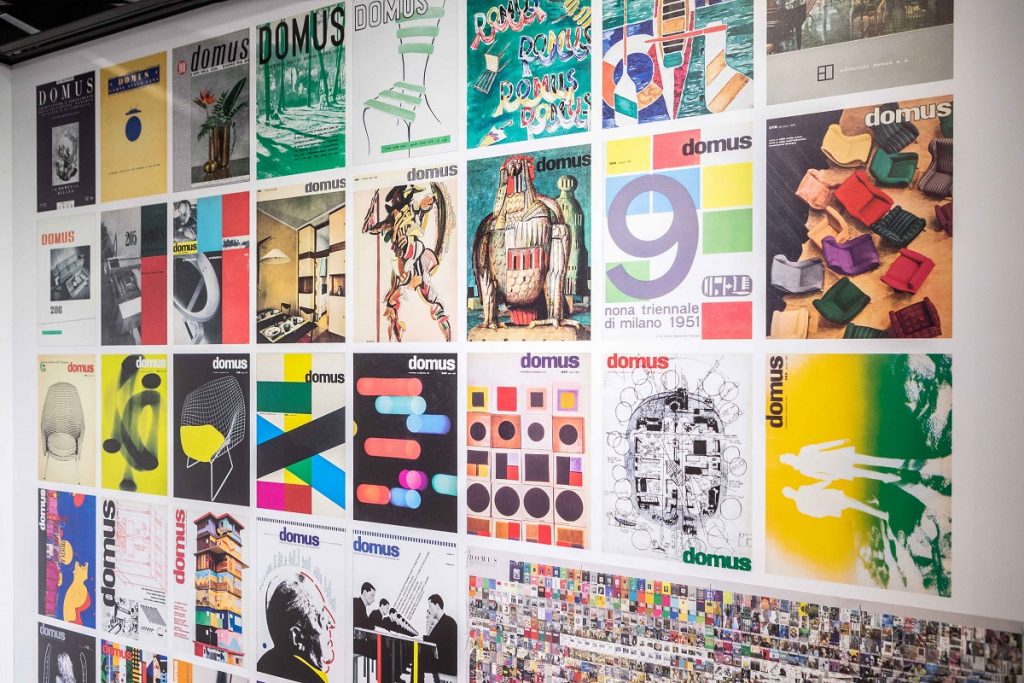 In 1909, the Italian poet, F.T.Marinetti, (1876-1944) published “The Manifesto of Futurism.” Futurism believed the unprecedented growth in technology and transportation would change everyone’s daily life. It praised the speed and the momentum brought by machinery and technology, considering it as a whole new kind of aesthetic. In 1915, the painter Fortunato Depero (1892-1960) and Giacomo Balla (1871-1958) jointly published the “Rocostruzione Futurista dell’Universo,” bringing the spirit of the doctrine into people’s daily lives, transcending the limitations of painting, and broadening into the fields of clothing, theater, visual design, etc.

The 1920s was the enlightenment era of Italian design. The Triennale di Milano was launched in 1923 to promote design and has become the most important contemporary design museum in Italy. In 1928, Italian architect Gio Ponti (1891-1979), in addition to his practice in architecture, furniture, and lighting design, had founded the first architecture and design magazine in Italy “Domus.” The magazine introduced the outstanding design and works of Italy and had become the important media of promoting Italian design in the world and thus contributed to its development. 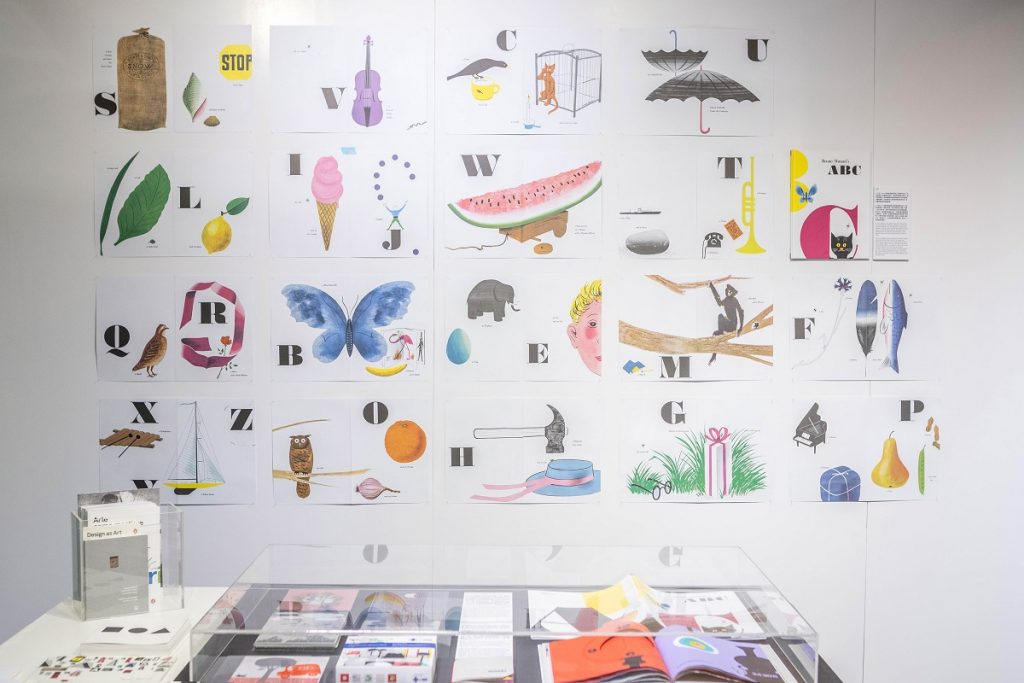 Followed by the massive destruction of World War II, the Italians, with their optimistic nature, started reconstruction planning. Mass productions based on standardization, practicality, and aesthetics were the main appeal. The impact in the context of culture, society, and design could be seen in Vespa’s scooters in 1946, FIAT’s convertibles in 1955, and in 1949, Olivetti’s typewriter, the Lettera 22. Olivetti’s utmost attention to design and visual communication was very much the firm’s guiding philosophy and has brought their fame to the global market. For example, graphic designer Giovanni Pintori (1912-1999) had been the art director over a long period of time. Olivetti’s corporate identity design had set the best model for Corporate Identity System (CIS).

In the 1960s, the standard of living in Italy had increased with the mass production of automobiles and refrigerators, followed by the household goods produced in plastics. The United States was the main influence in this characteristic of consumption, prompting Italian designers to travel to the States hoping for greater development. Unimark International was founded in 1965 by Italian Massimo Vignelli (1931-2014) and Dutch Bob Noorda (1927-2010) and four others in Chicago, USA. The company has become the largest multinational design company at the time with 48 branches around the world, dealing with corporate identity system design such as Ford Motor, and Japan’s Matsushita Electric, and the New York subway index system. Unimark broke new ground and promoted the Corporate Identity System design between 1960-1980. 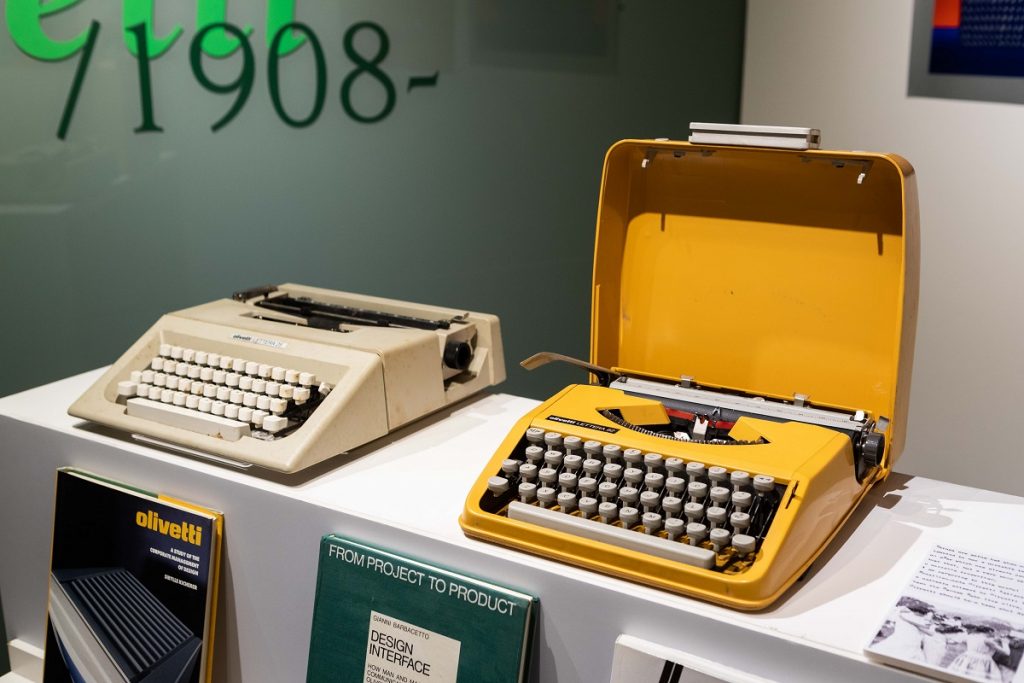 The famous Italian architect and designer Ettore Sottsass (1917-2007) assembled designers in Milan, Italy in 1981 and established The Memphis Group. In order to break the monotonous style of Functionalism and Internationalism and to abandon the theory of Form follows Function, The Memphis Group, with the use of uniquely sleek, colorful, and bizarre patterns, followed by the fresh trend of commercialization and commodification, took the world by storm and became the representative of postmodernist design. This trend continues to develope till today, as British designer Peter Judson presents Memphis style to create his refreshing graphic expression.

In 1992, due to the advancement of software, design procedure started to employ computer assisted design to process large amounts of images and layouts. With the age of consumption in the 21st century, computers, internet, and digital technology give designers more room for creativity. Fabrica is the communication research center of the Benetton Group, established in 1994 consisting of workshops, school, and exhibition center. Fabrica is dedicated to merging different cultures, spreading liberated ideology, and presenting concepts with artistic methods and experimental spirits, thus, creating new forms of visual aesthetics.

The globalization in the 21st century has led to a more open, more conceptual, and faster change in design. Newcoming Italian designers such as Leonardo Sonnoli (1962-), Think Work Observe – Piero Di Biase and Alberto Moreu, Studio Mut – Thomas Kronbichler (1985-), Martin Kerschbaumer (1988-), must constantly reorient their positions and, while stabilizing Italy’s leading role in design, continue to come up with original ideas and announce to the world – the Italian design. 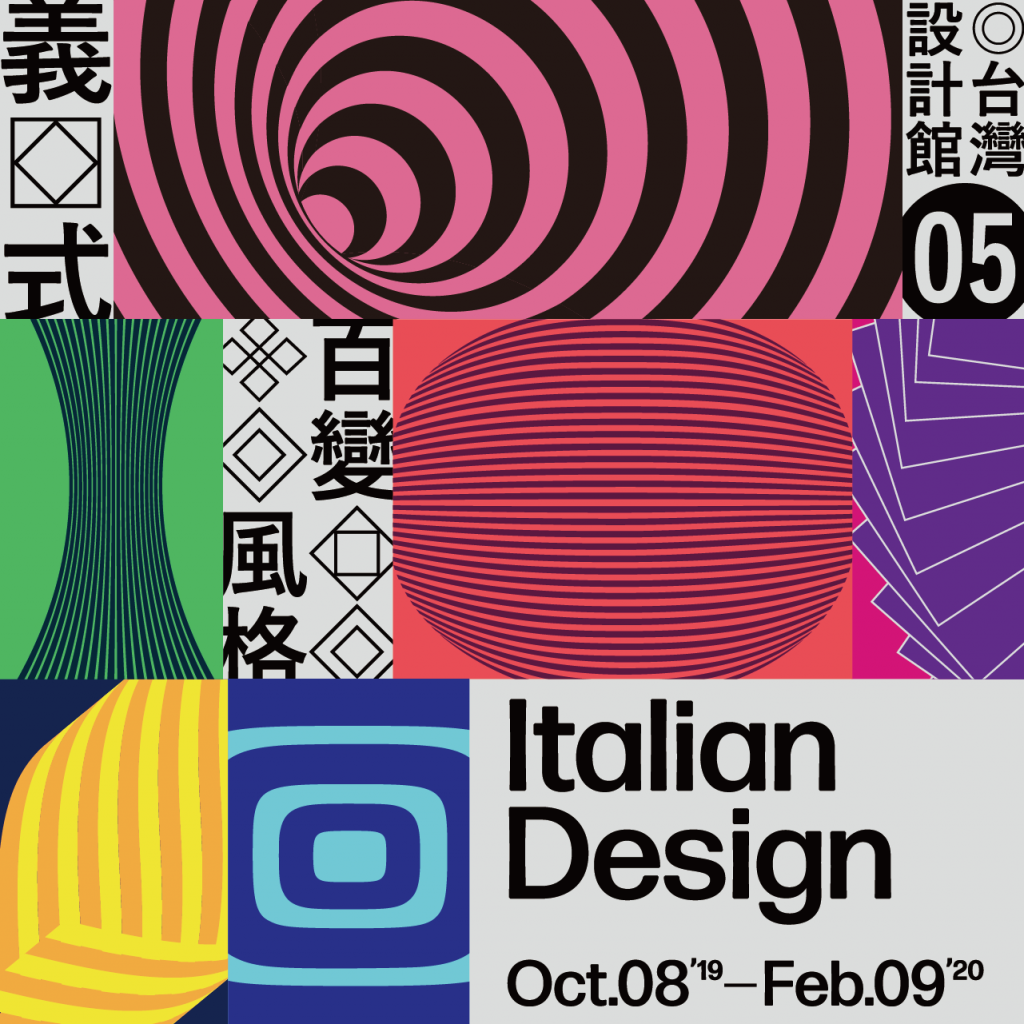 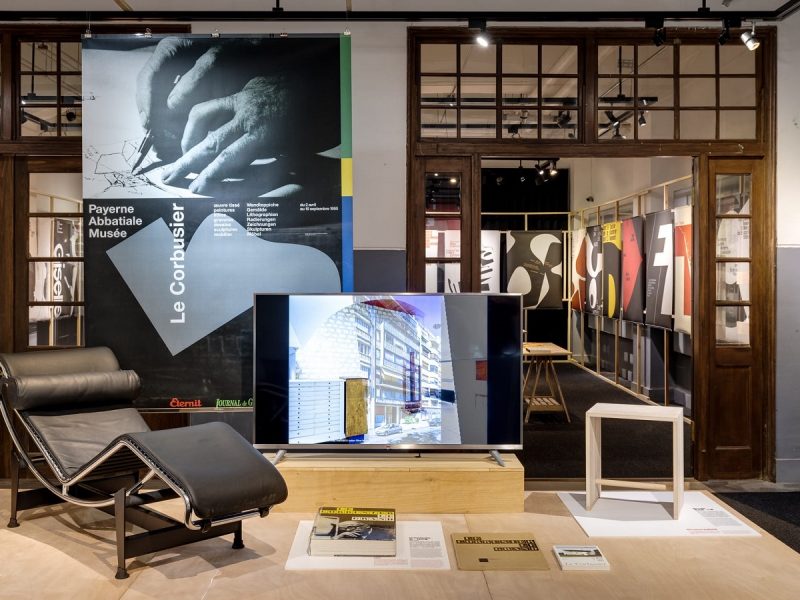 From 28th September 2021 to 6th March 2022, TDRI launches the Swiss MAX-Swiss Design Exhibition. The exhibition is curated based on the unit of “hundred”, including 100 designers, 100 product designs, 100 posters, 100 books, etc. A large number of exhibits lead the audience to explore the 100 years of aesthetics and design history of Switzerland. 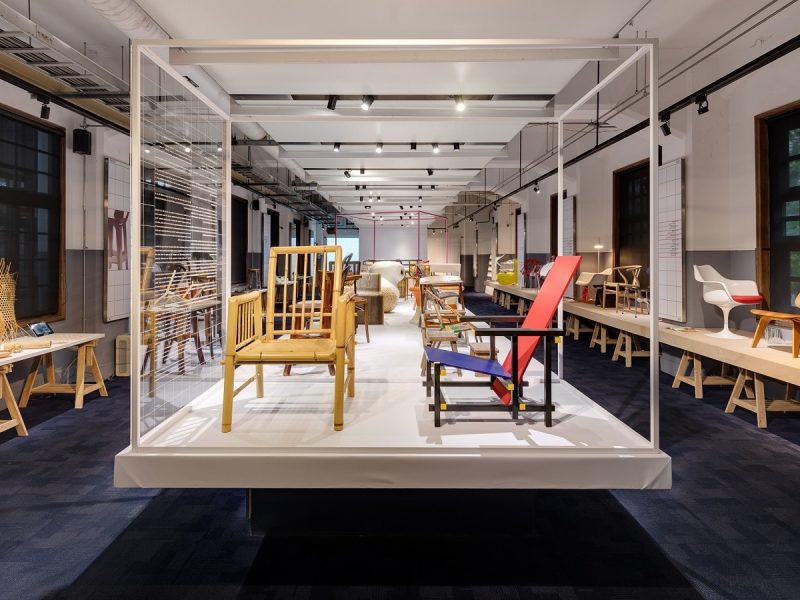 SIT DOWN PLEASE: Looking for Taiwanese Aesthetic from the Local Chair Design

This exhibition is a response to contemporary life. In times when malls have become the main location for purchasing furniture, this exhibition hopes to become a starting point of re-organizing the history of Taiwan design, and that the genuine passion for creativity can leave imprints in the future. 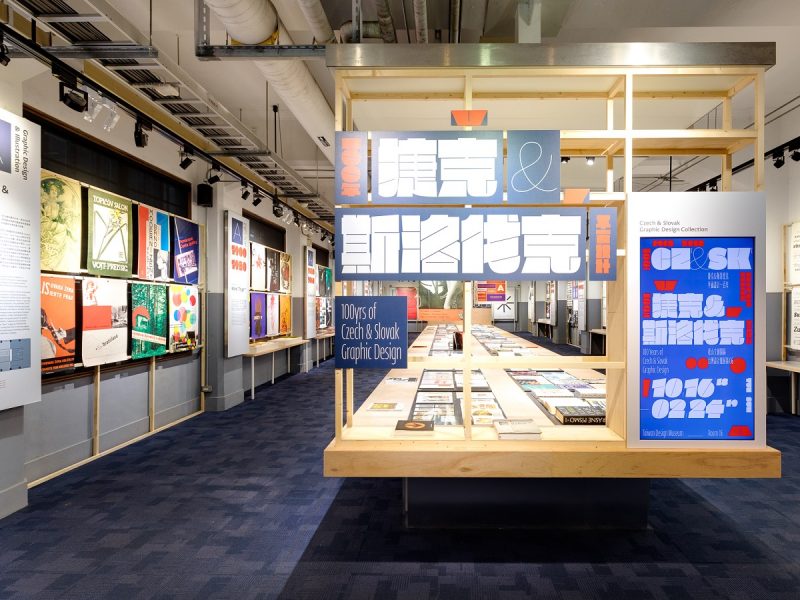 Walking through 100 Years of Czech & Slovak Graphic Design at TDM

From Mucha to Contemporary New Designers Dialogue of Graphic Designs across Centuries Based on the evolution of graphic design in Czech and Slovak, the curatorial team uses “decade” as the unit to display posters, illustrations, books, and promotional materials of different generations, reflecting historical situations […]

Taiwan Design Museum
TDC Stimulates Design for Aging Society: Seven Projects Are Chosen to Present in Japanese
The Impact of Taiwan Design Will Be Heard Globally! WDO Named Mr. Chi-Yi Chang as the Newest Board of Directors 2019-2021